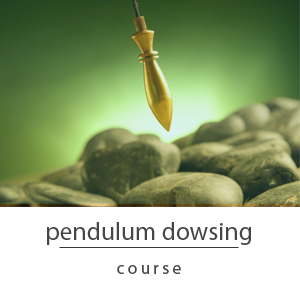 Dowsing is also known as Western Geomancy, Radiaesthesia and Divining (this is often linked with divining for water). There is a lot of dispute in Feng Shui circles (not at the Master level though), that Feng Shui and Dowsing are not good bedfellows. This chatter is coming from people who do not understand either and more particularly both subject matters. In both practices we need to attend to the energies that arise from the earth and the energies that arrive at the earth or building. There is actually no mismatch between eastern and western geomancy. The best definition is: being able to detect the unseen using an amplifier or antenna to supplement or augment the body’s innate detection system. It is not really that mysterious.

Many ‘alternative’ or complementary therapists use pendulums to identify things (food, medicines, supplements) that suit their clients or which they should avoid.


There is undoubted evidence of dowsing / divining being used over milenia. The ank is seen by many as a simple divining or dowsing tool.

The awesome Chartres Cathedral is built over the convergence of 7 streams. The original font was placed over this ‘source’ of water. It is now only apparent if you manage to tour the under church (something I was fortunate to do some 10 or more years ago – a breath taking experience).

It is common to Celtic and druidic practices and again is used to detect underground water / streams.


How do you learn dowsing?

There are some excellent books written about Western Geomancy and they are reliable. For both practices you must have a personal meditation practice that allows you to get centred and be able to exclude any external influences that are not relevant to the analysis. In Western Geomancy there are many different lines that are referred to. They include Geopathic Stress, Hartmann lines, Curry lines or Grid. Some of these names are used interchangeably sometimes and they can also be more emphasised in different regions that use western geomantic practices.

The best way to learn dowsing or divining is standing at the elbow of someone who is competent. You can usually find these folk in all corners of the globe. For example my husband’s grandfather was a radiaesthesist – he found the water ‘source’ and the well was dug which still yields water 60 – 80 years on. In my small town there is an amazing old fellow who has been water divining for about 70 years now.

Many animals automatically ‘detect’ these fields or streams or charges. Some animals will converge upon positive lines and others such as ants (yes I know they are not animals but insects) and cats are able to detect negative lines.

Because of movements in the earth when it is subject to differing climatic conditions the presence and intensity of these fields / streams vary. With wet conditions following extended periods of dry dissolved salts can rise higher to the surface and cause problems when previously there were none.

Safe Levels of EMF's There is absolutely no argument from anyone that Electro Magnetic Fields are a part of our natural and built environment. The argument often arises about what are safe exposures and what generates these fields such as earthing the electrical system via the copper water pipes in older style buildings. Most states of Australia have issued new guidelines to stop this practice as some plumbers have been electrocuted when replacing copper pipes.
There are several studies that have linked health problems to exposure to EMF's. If you are interested in following through on this research go to Don Maisch  site. Don has gathered extensive research from many sources.
The fields have different Vibrational rates referred to as hertz or gauss. When electromagnetic fields appear to be too high or there is chronic illness present. There is dispute about exposure to Extremely Low Fields and Don has some very pertinent things to say about the extraordinary incidence of Breast Cancer in women working at the ABC studio at Toowong (Qld).

There are different types of lines the outcome of which is stress for the human system. It is interesting that other sentient beings react to them in different ways. Dogs avoid stress lines, cats love them, ants build their nests over them but birds avoid them. If you are willing to observe your natural environment and the creatures that inhabit or pass through it you can get an idea about how beneficial or harmful these lines are.
When living and particularly sleeping over geopathic stress the human immune system is weakened and disease states ensue. When these lines cross each other they are much more likely to create these disease states. These are often called vortexes. The energy is very strong and will weaken the body system that coincides with the vortex.

If you want to read more about this then there is a chapter devoted to it in Feng Shui for Your Classroom.

Here is a great definition of Dowsing and Geomancy.

When the road is higher than the roofline it brings serious problems to the inhabitants.