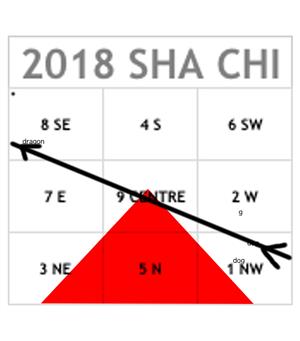 The sha qi this year comes from the direction of the dog (north west) and strikes the dragon (south east). These are considered do not disturb areas and are called either Tai Sui and Sui Po, or Grand Duke of Jupiter and year breaker. The names are less relevant than their impact. These areas are considered do not disturb areas. That means do not dig, construct or demolish buildings in these directions in 2018.

Remember that the solar year commences on the 4th of February at 5.28am. Chinese Lunar New Year commences on the evening of the 15th of February this year. In Chinese culture (depending where you live in the world), New Year extends for from 3 to 15 days. If you follow lunar calendars then you will note that this spans from the new moon through the full moon. Many things are done to welcome in the new year. One of the quaintest is making account to the Kitchen God for your actions through the year. But what is useful from this tradition is to realise 1) we do need some time to reflect on our actions through the previous year 2) make plans to rectify and address our failings. This is done for the month that precedes Chinese New Year. You clean and sweep, you tidy and scrub all the house so that your merit will accumulated for 2018. Our rituals to change over the annual energies are important and, I usually encourage people to start the change over and cleansing in January, but this year, because of the later date of the lunar new year we can do our changes from the 21st January through the 3rd of February.

This means if you are going to build, demolish or generally disturb the earth for greater than 1 - 3 days then do it in the period before 21st of January.

2018 the clash will be to the water frame from the fire frame. This means that Li Gua (south - Fire) will clash with Kan Gua (north - water). When we have water and fire fighting with each other it creates steam so making it very difficult to find the rightness in any situation and what the truth of matters are. When water clashes with fire it creates explosions. This is very challenging. This means that the areas of the world that are governed or fall into the north and south when we spread the globe out from the International Date Line Kan Gua spans from Libya, Italy, France, Central & Northern Europe, Scandinavia the UK, part of Greenland. The southern gua (Li) takes in most of central and west coast of Africa through to South Africa.

In addition Kan Gua (North) is afflicted with the illness star 5.

The clash to the water frame (Kan Gua) also has the sickness star 5 falling here. This means that water related diseases which cause fevers will probably arise in northern Africa and be spread to Europe. This sounds a lot like Cholera, Typhoid, Legionella and Leptospirosis. Particularly as Cholera affects the spleen which is the target organ / meridian this year because it is governed by earth.

It falls through most of the USA, Canada, Northern part of South America, and West Africa. This will see localised outbreaks of gastric related disorders. Additionally there will be increase in hard tumours particularly affecting women.

This may result in the much feared harsh rhetoric we hear from Trump and Kim Jong-un, or between Palestine and Israel. These powder kegs are under the influence of 7 star - lets hope that wisdom and kindness prevail.

The Rat and the Monkey will also experience pressure as they are friends of the Dragon and the Rat is at home in Kan Gua so cops the illness 5 star. This means that you need to be especially attentive if these animals feature in your chart significantly.

I have spent many years exploring charts of people in the public domain so if you have been following you will know how a chart is set out and that there 8 palaces which constitute a natal chart with 2 luck palaces having a 5 year influence on a person.

Any of these 9 relevant places can be under challenge in any year. It also depends on your chart as to whether it is significant as it might be involved in protective combinations or be additionally challenged if for example you have two dragons or a dragon and a rooster in your chart.

As mentioned in the newsletter 2018 is a Fei Kong year. Both the Dragon and the Dog can be fei kong when combined with Yang Earth, Yang Water or Yang Metal. If these occur in your chart then you will experience struggles for power. If you don't have a way of dealing with power, yours and others, then you will come into conflict with others and little things will blow up in your face.

Several of my clients are Fei Kong people and they must be aware that this energy will become over stimulated for them. The practice of mindfulness and gentle surrender are important this year.

October is a Yang Water Dog month so it will come into greater dominance in that month. But be aware, as the whole year is a Fei Kong year that in the public and the private domain struggles for power and winner take all attitudes will be prominent. Step out of the conflict, turn aside to personal contemplation.

When the road is higher than the roofline it brings serious problems to the inhabitants.