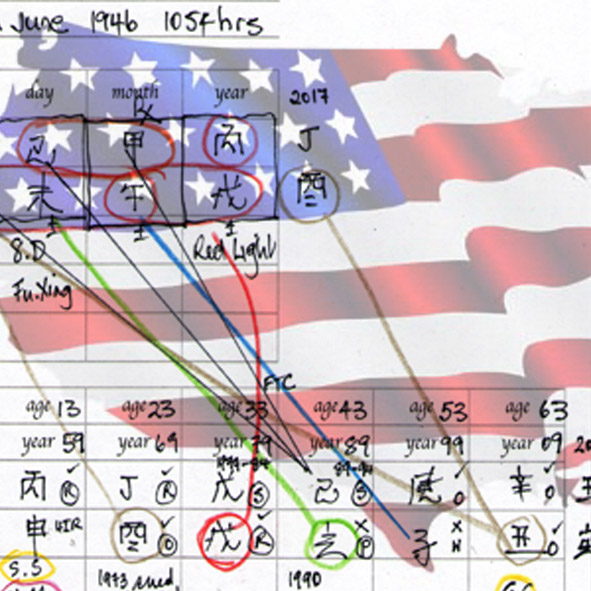 I thought it would be interesting to look at the charts of Jared Kushner, Ivanka Trump, Donald Jnr and Donald Trump (Snr). It was to see how they connect together and what we can expect as the Congressional hearings into the whole 'Russian Affair' begin. Please note - these charts are based on a lunar calendar which I have been experimenting with for about 5 years now and find to be very effective and insightful.

Lets look at their charts here:

Jared tries to surrender to water - the monkey and the rat combine together to give him a partial team of water. In the year or luck cycle of the pig he can become seasonal water. This is despite having no stems that support this surrender. We do not have his hour of birth and so cannot delve very deeply into his chart as one quarter is not visible - my statements are made in this context.

He entered his current luck cycle of yang water dragon in 2009. This completes stem and branch water - he therefore is currently surrender to water. This means that last year 20016, being a yang fire monkey year, he was riding high. That is born out by the facts of 2016 - he was certainly favoured throughout Trump's presidential campaign. The Dragon is able to complete a full water team for him - he entered the dragon phase of that cycle in 2014. Yang Water Dragon is a Yin Yang Miss Match (YYMM) pillar (see Dr Jin Peh and Lilly Chung's books for an explanation of this concept). Additionally the months of June, July, August, are YYMM months. September 2017 is a special month for many of us. These YYMM sequences have been the fly in the ointment for him.

He sits on two special stars which helps get him out of trouble and has one of his nobleman branches - the ox in his month branch.

2004 (yang wood monkey year just as he was entering the rabbit phase of his 2nd luck cycle) his father was taken away from him when he was arrested and then jailed (2005) in the yin wood rooster year. His father is represented by his yin earth month stem (natal chart), which made a combination with the yang wood stem of 2004. Then 2005 the rooster clashed with his luck pillar branch (rabbit) and the yin wood of the year stem combined with the yang metal of his year stem. We do not have sufficient information about his grandfather to make comments.

He married Ivanka 25th October 2009 (yin water rabbit day, yang wood dog month, yin earth ox year) - he was moving into his Yang water luck cycle then. His Day Master combined with the yin water of the day, the yang wood of the month combined with his month stem. In addition the ox is his special and nobleman stars.

Jared provides Ivanka with the missing ox to form a full team of metal which makes her a very strong metal lady. Ivanka gives him 4 stems in a row with her yin metal day master and yin metal year stems.

Whilst he surrenders to water as a Yang Earth Day Master his favourable elements are water, metal, wood. 2017 is a yin fire rooster year. We have passed the influence of the yin fire and are now into the rooster part of the year. The rooster provides him with metal which is favourable. These all add up to being auspicious for him - he should survive the battles that are unfolding around him on a daily basis, particularly after the during and after the rooster month passes.

Is a yin metal day master, with a partial team of metal in her branches and a further yin metal stem. She is a follow metal chart or can be called dominant when the full team of metal is present in the year and months of the ox. She married Jared Kushner in 2009 (yin earth ox year). Jared has an ox on his month pillar and therefore keeps her dominant. There is a spoiler in the chart the pig which clashes with her snake and can combine with rabbit or sheep to form wood which is unfavourable for this dominant metal lady.

She has a strategists day pillar, sits on power and has a strong intellect. In her month pillar she also has a special star but also a loneliness star. At age 33 in 2014 she entered a new luck pillar of yin earth rabbit. The rabbit will try to combine with her pig in her month pillar and will cause problems for her from 2019.

She has a YYMM pillar in her year of birth. This also means that she is vulnerable in 2017 in June, July, August and September. She would do well to employ someone or have a friendship with someone who can provide her with yang wood rat.

Her marriage to Jared is strong, but there is a loneliness star in her natal chart.

Again we do no have his hour of birth which is strange as all the children were born to important people - perhaps they are being deliberately withheld from the general public?

Donald has a Fei Kong (FK) chart - but he needs to find another FK to complete or seal the energies. The Month of October 2017 is a FK month and the following year 2018 will be a FK Year. He sits on wealth and has his special star present on the Day branch. He also has one nobleman branch in his year branch.

He has two Yang Water in his stems - his Day Master and his Month Stem -  which represents his father and is a stem clash. This is not auspicious. In addition, his Yin Fire Year stem combines with his father to take his father away. The truth is, his father was essentially missing for most of his childhood, as he was away attending to business matters. He spent a period of time in his later adolescence when he was pretty 'wasted' according to wikipedia. He has some other special configurations on his pillars which can bring him back from the brink.

We would describe him as having a changing chart; he can become water, metal or fire, depending on who shows up in his life to help manifest this or that tendency or the unfoldment of his luck cycles and the annual energies.

He has a YYMM on his day pillar. This makes some of the good things in his chart a more challenged. He, like his sister Ivanka, would do well to find a mentor, helper, friend or companion who has yang wood rat in their chart.

His current luck pillar through to 2055 are also YYMM pillars for him and this is not auspicious.

Is a dominant earth person with seasonal fire sitting in the last 3 stems. His Horse combines with his Dog to form partial team of fire in the first part of his life. He has some very good configurations in his chart including having a special day pillar and hour pillar.

He has a remedy pillar for YYMM charts which accounts for his public appeal.

He has Yang Wood sitting in his Month stem - this makes a combination with his day master and takes his father away - this is a power combination - you just need to look at biographies about his relationship with his father to see how that played out. His Yang Wood also plays havoc with Jared's month stem, and with Ivanka's month stem.

Ivanka is a mostly dominant metal lady so she can be close to him. Jared's ox is one of Donald's special stars and the monkey is his other special star. Donald Jnr provides one of Donald's noblemen (the Rat). The Monkey is the reason he won in 2016! Again June, July, August 2017 are YYMM pillars. These bring challenges to most people. He changes luck cycle in 2019. As the Ox is his Special Star he may survive until 2019 but perhaps his time is running out. Depends who he draws close to him and who he pushes away.

Curiously he has chosen a man who has some of his unfavourable elements dominating in his chart. The rabbit in Scaramucci's chart combines with Donald's favourable sheep to form wood, which is most unfavourable for him. The pig month will be VERY challenging, as was the sheep month. If Scaramucci is still with him in November it will be more tricky for him than July. Scaramucci does have the monkey in his current luck cycle but it cannot be accessed until 2018!

I think, in summary, that the Trump dynasty would have been better served outside of politics. Everyone has been subsumed into this adventure and it has brought difficulties for the whole extended family.